Move Over Silkworms, Spiders Coming Through! 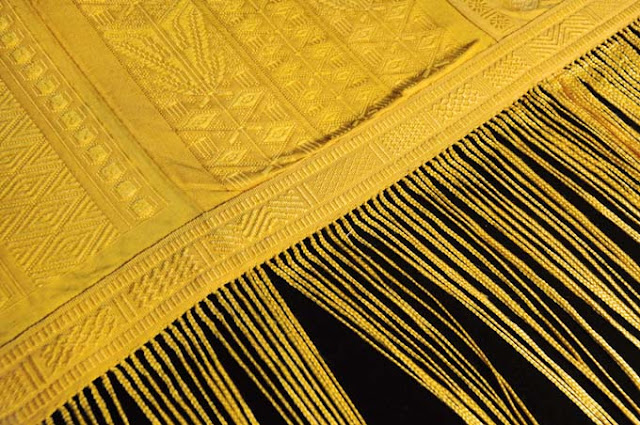 A rare textile made from the silk of more than a million wild spiders went on display last week at the American Museum of Natural History in New York City.
How did spiders produce this unique golden cloth?

The resulting 11-foot by 4-foot textile is the only large piece of cloth made from natural spider silk existing in the world today. “We built a replica of a hand-driven 24-spider-silking machine that was used at the turn of the century,” said Nicholas Godley, who co-led the project with Peers. To test the machine, an initial batch of about 20 spiders were collected. “When we stuck them in the machine and started turning it, this beautiful gold-colored silk started coming out.”
But the silk experts had to drastically scale up their project. “Fourteen thousand spiders yields about an ounce of silk and the textile weighs about 2.6 pounds. The numbers are crazy.”


Spider silk has incredible properties; it's stronger than steel or Kevlar but far more flexible, stretching up to 40 percent of its normal length without breaking.
Unfortunately, spider silk is extremely hard to mass produce: Unlike silk worms, which are easy to raise in captivity, spiders have a habit of chomping off each other’s heads when housed together. By the end of the project, silk had been extracted from more than one million female golden orb spiders, which are abundant throughout Madagascar and known for the rich golden color of their silk. Because the spiders only produce silk during the rainy season, workers collected all the spiders between October and June.
Then the hand-powered machines extracted the silk and wove it into 96-filament thread. Once the spiders had been milked, they were released into back into the wild, where it takes them about a week to regenerate their silk.
“When we talk about a spider spinning silk, we’re talking about how the spider applies physical forces to transform a liquid in their abdomen to a solid of silk,” said spider silk expert Todd Blackledge. “Science simply can’t replicate that as well as a spider does it."
So for now, it seems we’ll have to be content with one incredibly beautiful cloth, graciously provided by more than a million spiders!
Images: 1) AMNH/R. Mickens 2) Nicholas Godley and Simon Peers
Posted by I Spy Animals

Invent a helmet to keep the spiders from chomping off each others heads. You'll make a fortune......

Wow. Amazing! :D Can I have a blanket woven from this silk?

Are you of royal family? Perhaps a millionaire? Then, yes! ;)