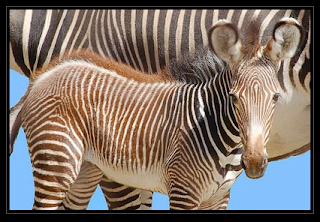 So since we are identifying species, we are going to try our hand at seeing the differences in the eight types of zebras that exist today.

That's not as hard as you might think, because there only three species we actually need to key on; the rest are subspecies with very similar features.
The Grevy's zebra is the first of the three zebras species we'll study, so take a look at the first photo.

This is the most horse-like or mule-like of the zebras, having very large rounded ears. It's stripes are thin and close together.


Let's look at three simple IKs and the corresponding photos:
1st IK*: Large round ears. Overall thin stripes.
2nd IK: Pattern of stripes on flank comes together in a triangular shape. No underbelly stripes.
3rd IK: Wide dark back stripe runs down into the tail, surrounded by thin rump stripes.
See, simple.  But these IKs will soon have you able to choose the Grevy's zebra out of a whole herd! Stay tuned for my next post on the Mountain zebra.

Zebra has a design on his skin it was just like triangle I always want to know about animals but couldn’t found any informative resource to read top essay writing its helping to desing the skin. After that I find a blog name I Spy Animal this has all information that I need.

gemini22 said...
This comment has been removed by the author.
25 May